Your vote matters.
Find out which candidates will protect your health and quality of life.

The Conservation PAC (CPAC) is a political action committee. We make political endorsements for pro-environmental candidates in legislative and statewide races, and raise money to help elect these candidates.

We are nonpartisan, and we only target races where our investment can make a difference. Our vision for the future is a pro-conservation majority in the North Carolina General Assembly, where legislative champions pass environmental safeguards and protections.

To get there, we need more citizens like you — thinking, acting, and voting on behalf of the environment.

Why an Environmental Group Went Political

Since 1968, CPAC’s parent organization, the North Carolina League of Conservation Voters (NCLCV), has been working to protect every North Carolinian’s health and quality of life. We fought battles in the media, in the courtroom, before state boards and commissions, and at the General Assembly. We have been lawyers, citizens, teachers, parents, and lobbyists.

After 30 years, we realized that no matter how effective an advocate you are, no matter how good your lobbyist is — it doesn’t matter if the decision-makers don’t care about your issues.

In 1999, NCLCV established the CPAC to help environmentalists be more political, and politicians be more environmental. We are one of the few environmental groups in North Carolina who can directly engage in elections.

Our Goal: elect a pro-conservation majority to the North Carolina General Assembly and other state offices. 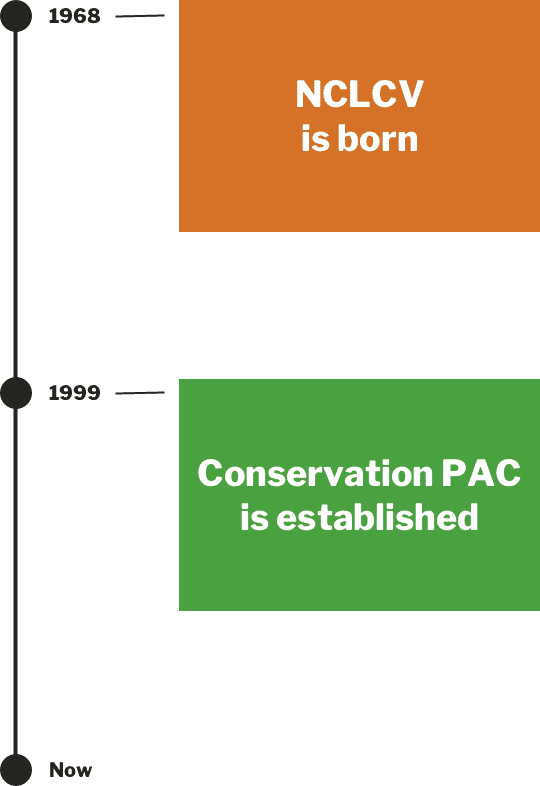 You deserve leaders who support clean air, water, and energy. See who we are backing in NC elections.

The first step in holding an elected official accountable: know whether they voted in favor of the environment.

Many officials say they support strong environmental laws, but do not always act accordingly. Visit our parent organization, NCLCV, to see how your leaders scored.

From insider looks at environmental legislation from our lobbyist working the halls at the General Assembly, to updates from our national colleagues on pressing federal issues  — you can sign up to become an NCLCV Conservation Insider.